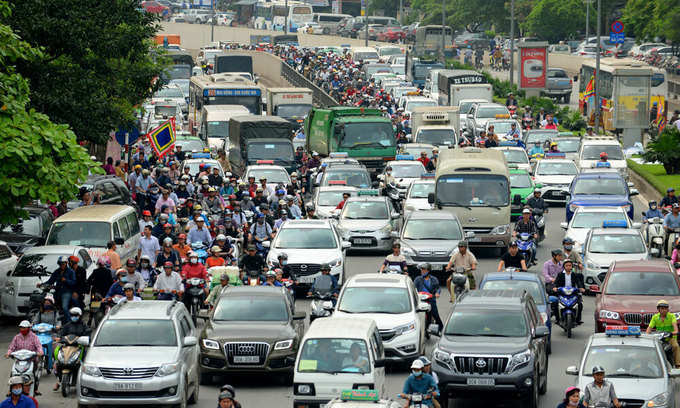 Cars and motorbikes move during rush hours in Hanoi. Photo by Shutterstock/MinhHue.

Consumption of imported cars has skyrocketed while that of locally-assembled ones is falling despite efforts last year to tighten imports.

From January to August, sales of imported cars rose 178 percent year-on-year to 82,800 units, while that of locally-assembled vehicles dropped 14 percent to 119,700 units, according to the Vietnam Automobile Manufacturers’ Association (VAMA).

The number of imported vehicles with nine seats or less in the period almost quadrupled to over 71,000, according to Vietnam Customs.

However, the high increase in imports this year has to do with a plunge last year because of a government decree that introduced tougher conditions for car importers, requiring them to provide certain certificates to ensure quality and countries of origin. This had led to a decline of 20 percent from 2017.

Imports started to regain traction in the second half of last year when businesses were able to meet those requirements.

Vietnam is considering removing special consumption tax on car parts produced locally to boost local manufacturing. Some businesses are shifting their production of high-demand vehicles to the country.

As Vietnam sees rising demand among people to switch from motorbikes to cars alongside an increase in the country’s per capita income, annual car sales could more than triple in the next five years to reach a million in 2025, according to the Ministry of Finance.

Vietnam imported 95,900 automobiles in January-August, up 3.2 times year-on-year, 86 percent of these from Thailand and Indonesia, according to Vietnam Customs.