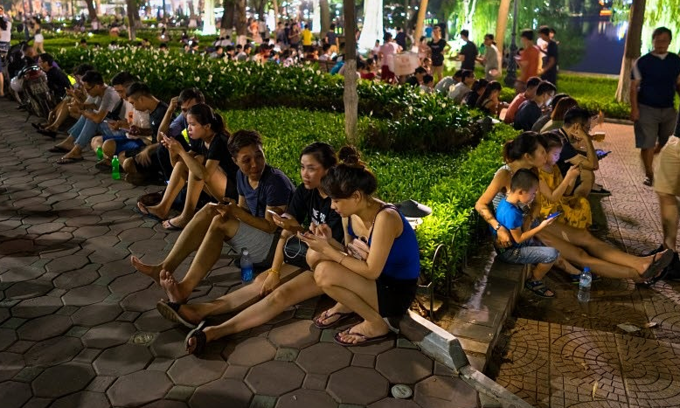 People surf Internet on their phones in a park in Hanoi. Photo by Shutterstock/Andy Tran.

Internet speed in Vietnam is ranked 89th out of 207 countries and territories and far behind some of its regional peers, according to a survey.

With download speed of 7.02 megabytes per second, Vietnam’s internet speed ranking is down 14 places from last year, according to the survey done by Cable, a U.K. broadband, TV, phone and mobile provider.

The ranking was based on data collected over 12 months from May last year, analyzing over 267 million speed tests worldwide.

It is however, ahead of Indonesia, the Philippines, Myanmar, Brunei, Cambodia, Laos and Timor Leste.

This year, Singapore has been dethroned and pushed into second place in terms of internet speed by Taiwan, which tops the world with average broadband speed clocking at 85.02 Mbps. Jersey is third with 67.46 Mbps, followed by Sweden with 55.18 Mbps.

The top 20 fastest-performing markets are in Europe and the Asia-Pacific, while the slowest are mostly in Africa.

Downloading an HD movie of 5GB in size would take only nine minutes in Singapore, while it would take over one hour and a half in Vietnam, the survey said.

Around 64 million people in Vietnam, or over half of the country’s population, are online.

Vietnam currently has six submarine cable systems, plus a 120 gigabit channel that runs overland through China. Frequent undersea cable ruptures have given Vietnam a reputation for unstable internet connections.