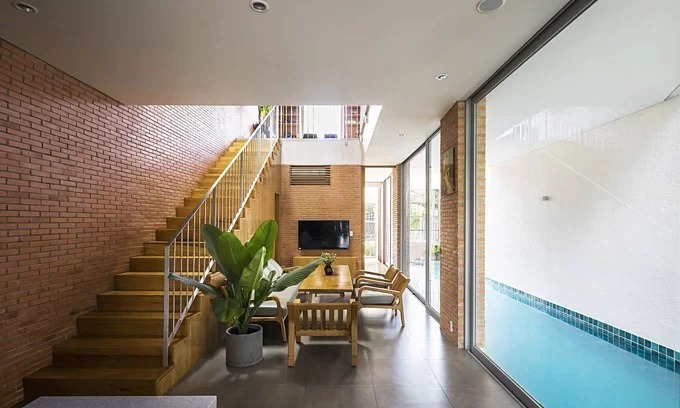 The Ha House has a swimming pool inside the living room. Photo by Hiroyuki Oki.

The Ha House, designed by famous Vietnamese architect Vo Trong Nghia, is among 267 projects nominated for the prestigious Dezeen Awards this year.

The board of editors of Dezeen, the world’s most popular design magazine, has received more than 4,500 entries from 87 different countries for the annual awards that recognize the world’s best architecture, interiors and design projects, as well as the individuals and studios with the most impressive output.

Among the 267 architecture projects that have won nomination is the Ha House, built this year in an emerging residential area, which is 15-minutes drive from downtown Ho Chi Minh City.

The special house is a three-level brick building built on a narrow 7×20 meter piece of land for a three-generation family. Two things that make this house stand out are: a continuous garden that runs up to the terrace; and a swimming pool inside the living room.

Recently, the Ha House was included in the list of 50 Best Houses of 2019 by ArchDaily, one of world’s leading architecture sites.

Other notable inclusions in the nomination list are a house on the Great Wall of China, a cyclone shelter in Bangladesh, a concrete pavilion with a 3D-knitted framework and the U.K.’s first sustainable mosque.

The nominations in many categories like urban house, rural house, housing projects, residential rebirth projects and civic buildings will be judged by leading architects and industry figures including Frida Escobedo, Sou Fujimoto, Doriana Fuksas and Winy Maas. Those shortlisted for the awards will be announced in September.

The winner in each category, set to be announced in October, will go on to compete for the title of architecture project of the year.