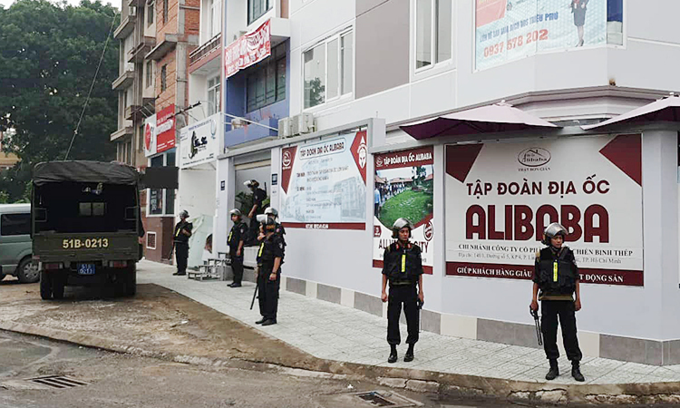 A Saigon property firm is suspected of swindling VND2.5 trillion ($107 million) from 6,700 people, tricking them into investing in ghost projects.

Investigators say that documents seized from the office of real estate firm Alibaba on Friday show 6,700 customers lost their money after investing in 40 projects.

Police have summoned Huynh Thi Ngoc Nhu, the firm’s deputy CEO in charge of external affairs and staff training, for clarifying the information they have collected.

The latest move is part of an expanding investigation into the “fraudulent appropriation of assets” by Alibaba.

Luyen is said to have masterminded the plans executed by Linh and his accomplices in founding Alibaba and its subsidiaries to have people invest in non-existent projects in certain southern provinces.

These projects were neither approved by authorities nor did they go through any legal process, police said.

Among them are eight plots of agricultural land covering over 70 hectares (173 acres) in Phu My Town of Ba Ria-Vung Tau Province, a neighbor of HCMC, and 29 property projects with total floor area of 80 hectares in Long Thanh, Nhon Trach and Xuan Loc Districts of Dong Nai Province, which also borders the city.

Following the news of the arrests, hundreds of residents have visited the office of the city’s economic crime police in District 10, saying they were customers of Alibaba.

They brought contracts, documents of land right use transferring and related papers that they had signed with the company, expressing their worries and confusion.

In June, two employees of Alibaba were arrested for damaging properties and disrupting public order when they protested and threw bricks at bulldozers sent by authorities in the southern province of Ba Ria-Vung Tau to reclaim land plots from illegal real estate projects.

Alibaba claims to possess a charter capital of VND5.6 trillion ($241 million) and to employing over 2,500 employees working on 48 projects.