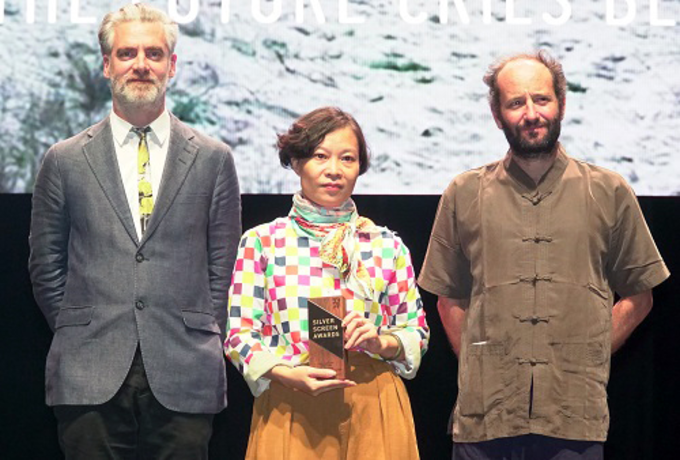 Pham Thu Hang, a rare Vietnamese filmmaker focused on independent documentaries, is driven by passion and a need to be creative.

Her work, as a genre, is yet to fire the popular imagination. But she is making waves in a widening circle of people enjoying the works of independent documentary makers within and outside the country.

Sitting in a Hanoi book café and sipping a cup of hot tea, she reflected on a trip she’s just made to a refugee camp in Uganda, courtesy of the German government, under a project where media personnel could gain experience and insights from the African continent. The suffering she saw reaffirmed Hang’s passion for documentary making.

Her very first documentary, Mua Cat Vong (Future Cries Beneath Our Soil), was screened at the Singapore International Film Festival last December, and won her the Best Director award in the Asian Feature Film category.

The film, which depicts post-war life in the central province of Quang Tri, had premiered at the DMZ International Documentary Film Festival in South Korea.

“I cherish the award, since my film was evaluated in the Asian feature film category, without differentiation between documentaries and fictional films,” she said.

The achievement is certainly a shot in the arm for Hang, whose passion for a less popular film path in Vietnam – that of independent documentary making – makes it a challenging endeavor, one with less job security.

For Hang, it was even more of a risky move. She had no thought of film making when she earned her undergraduate degree in history. After graduation, she started her first job as a researcher at a public institute, matching her academic qualification. But, Hang felt the job did not match her need to do something creative.

“I just wanted to do something that involved creativity,” said Hang. “I was working and at the same time trying to find a path that I could walk on.”

Once, Hang joined a film festival where the films she saw and the discussions she heard opened a new door for her.

“I didn’t plan to make films then, but I felt something had opened for me,” Hang recalled. “It was something that could help me release my creativity.”

In 2010, Hang got to meet the founder of Hanoi DocLab, a center for documentary filmmakers, where for the first time, she was introduced to the techniques of filmmaking.

“DocLab is a small center, but to me it is a film school which taught me generally everything about moving images,” Hang said. The initial training urged Hang to seek new experiences in filmmaking.

At a 2011 film workshop run by Varan Vietnam, a pioneer organization in endorsing independent documentaries in the country, a Filipino documentary on the Manila Bay slumdog completely changed Hang’s perception of documentaries, a film genre often seen as boring in Vietnam, where they are dominated by government-funded propaganda films.

“I got to witness the huge power of documentary in depicting social issues.” Hang also said she was amazed when she first saw a film based on sheer observation without interviewing any of the characters. “Everything about it was real, the people, the situation, the setting.”

With the foundations she received in DocLab and Varan, Hang made a total switch from researching, a stable job, to embark on making films. This time she was determined to follow her passion, no matter that she was a rookie.

She became the first Vietnamese person to receive a full scholarship for DOC Nomads, a prestigious joint masters program in documentary film directing in Hungary, Belgium and Portugal.

“I think everyone has a core element inside,” Hang said, looking back. “Whatever job we do, and however complex and winding the road might be, with our strong core, we can still find the right path.”

Armed with a solid academic background in documentary direction, Hang set out to make her first film.

When she heard about the death of two children to unexploded ordnances left behind by wars that ended decades ago, Hang’s interest was piqued. She spent several months travelling to Quang Tri Province to talk to the locals and listen to their life stories. Eventually this became her first film – Future Cries Beneath Our Soils.

She threw her heart and soul into making the film for four years, starting in 2014.

“A challenging task is to form a personal connection with the character,” Hang said. Documentary records real events and real people, so the first priority is to persuade the characters to join a project.

“Only when our connection is deep enough could I start filming. When they feel comfortable, I can film without feeling that I am utilizing them.”

Financing the project was another challenge. With a film crew of three people, Hang made many trips back and forth to Quang Tri for filming, while simultaneously writing applications to raise money for the film. Finally her film was funded by three South Korean funds.

Despite the hardships and almost zero income from the film, Hang found joy in the filming process itself. “The most fulfilling moment is when I can film a very satisfying scene,” Hang said.

Now that the film has been completed and shown at international film festivals, she is hoping it will reach a wider audience.

“Everyone wants their films to be shown in cinemas, but it is very difficult, since them film has to sell, or else no cinema will distribute it,” Hang said.

For now, Future Cries Beneath Our Soil has been shown at some culture centers in Hanoi, but it will be a long way until it can be distributed commercially.

Vietnamese audiences have a prejudice against documentaries and are reluctant to see them, said Bui Thac Chuyen, a director who won an award at the 2000 Cannes Film Festival Cinéfondation. “They think of documentaries as old war films funded by the government for propaganda,” he added.

While Hang’s film has still not reached a large number of viewers, she is hopeful that the genre of independent documentary films will become more popular in Vietnam.

Hang has embarked on a new adventure, planning a documentary about life of people in a leprosy village in the suburban Hanoi. Focusing on people living on the margins of a society, she is consistent in what she wants to show through her film.

“That is how I want to see life…, having something (beautiful) to hold on to when life is tough.”