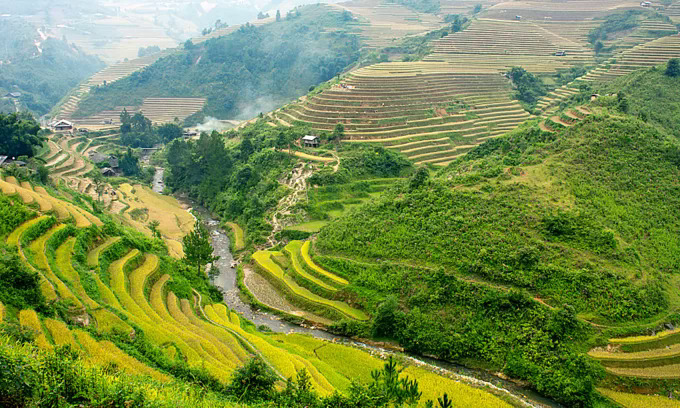 Sapa is famous for its rugged scenery and rich cultural diversity. Photo by Shutterstock/John Bill.

The vacancy rate in the central Vietnam destinations of Da Nang, Hoi An, Hue, and Phan Thiet is hovering around 50 percent on average, according to Agoda, a global online accommodation reservations provider.

On Traveloka, one of the leading flight and hotel booking platforms in Southeast Asia, a number of places in the ancient imperial capital of Hue like Gold Hotel Hue, Hotel La Perle, Cherry Hotel, and Huong Giang Hotel still have rooms for VND600,000 ($26) to VND1.4 million ($60) per night.

In Da Nang, the occupancy rate is abnormally low due to the city’s shortage of water. High salinity levels in the Cau Do (Red Bridge) River, the main source of freshwater for a million residents and tourists in Da Nang, mean the city can only meet 70 percent of its water needs.

Some hotels are refusing to accept bookings because they do not have enough water. At Melia Danang Beach Resort, the number of room bookings by Vietnamese between August 30 and September 2, the National Day, is only 10 percent.

The average occupancy rate of hotels in Vung Tau, a popular vacation destination in southern Vietnam, is also 50 percent, while it is 85 percent at some high-end hotels and resorts like Pullman, Malibu and Green Hotel.

Tu Le, a teacher working in HCMC’s District 1, said she booked two rooms facing the sea at Leman Cap Resort & Spa in the southern beach town, and the rates were not much higher than normal.

Bookings seem tougher at hotels in Da Lat. Most hotels and resorts in the Central Highlands resort town have been fully booked up ahead of the holiday.

Bao Lam, 32, a bank employee in Ho Chi Minh City, said he was unable to get a family room in a luxury hotel in Da Lat.

Nomad Home Dalat and Elegant Dalat Hotel, two of Da Lat’s most popular hotels, only have one or two double rooms available and they cost around VND1.2 million ($52) each per night, according to Booking.com, a travel fare aggregator and travel metasearch engine for hotel reservations.

Pham Van Bay, Deputy Director of Vietravel Hanoi, said since the National Day holiday this year is not long, most people have opted for domestic tours, with northern mountainous destinations like Moc Chau, Sa Pa, Cao Bang, and Ha Giang being very popular.

Pham Cao Vy, chairman of the Sa Pa Tourism Association, said most hotels have kept their rates unchanged though it could be a bit difficult for travelers to find a place.

National flag carrier Vietnam Airlines and low-cost carrier Jetstar Pacific have said they would add a total of 240,000 seats on domestic routes from August 30 to September 2 to meet the increased travel demand.

A video capturing the beauty of Vietnam from north to south