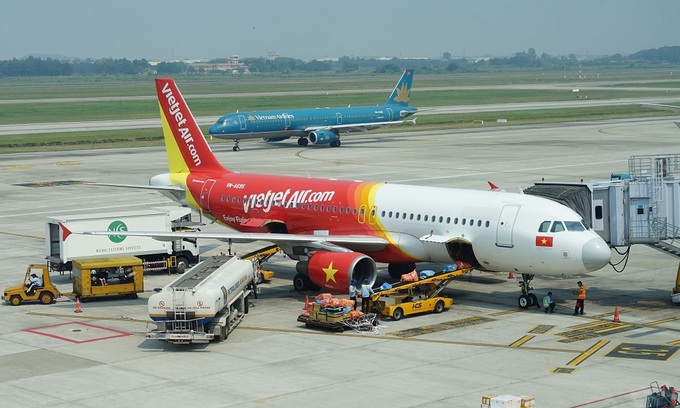 Vietnam Airlines and Vietjet are accusing each other of adopting illegal and opaque fare-listing practices.

The former earlier this month called on authorities to instruct other airlines to list net fares as stipulated by regulations. It cited a 2013 government decree which says listed prices of goods and services must include all taxes and additional fees.

Other airlines list fares without taxes and fees, which are only revealed when customers reach the payment stage, Vietnam Airlines said in a letter to the Ministry of Finance’s price management department and the Civil Aviation Authority of Vietnam (CAAV).

This practice misleads customers into thinking those airlines are cheaper, and affects its competitiveness, it said.

In response, budget carrier Vietjet wrote to the same two government bodies saying the listing of net fares like Vietnam Airlines does not guarantee transparency since customers do not understand what the components of their fares are.

Regulations do not specify whether a business must include taxes and fees in the listed fares, and so it was doing nothing illegal, it said.

In an obvious reference to Vietnam Airlines, Vietjet said customers have to pay by default for check-in baggage and meals even if they do not need them.

Most budget carriers charge separately for baggage and food. There are no international regulations for listing airfares, it added.

Officials are scratching their heads over the war of words.

A CAAV executive, who asked not to be named, said airlines must list their net fares, but enforcing this is the responsibility of the Ministry of Finance.

But the ministry has rejected this argument, with Dang Cong Khoi, deputy head of its price management department, saying airline fare listing should be managed by the aviation authority.

But the ministry would discuss the issue with the aviation authority, he said.

Only Vietnam Airlines lists net fares inclusive of taxes and fees, while Vietjet, Bamboo Airways and Jetstar Pacific, the low-cost subsidiary of Vietnam Airlines, do not include taxes.

Vietjet accounted for 44 percent of the aviation market share in the first half of this year, followed by Vietnam Airlines with 35.9 percent, Jetstar Pacific 13.9 percent, Bamboo Airways 4.2 percent and VASCO 2 percent.

Local airlines served 38.2 million passengers from January to August, up 9.5 percent year-on-year, according to the General Statistics Office.