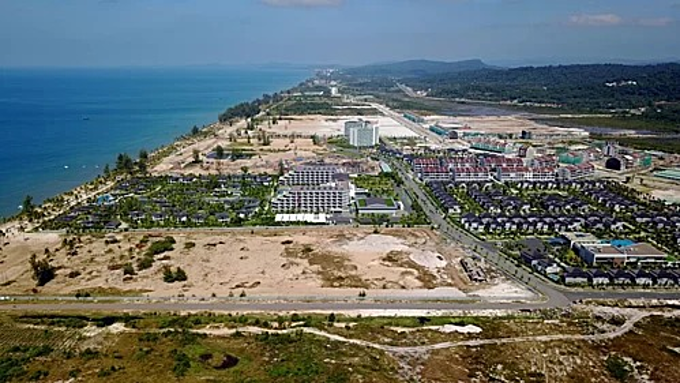 The plan to turn Phu Quoc into an SEZ was first approved in August 2018. Photo courtesy of Kien Giang Province.

In a recent letter to Prime Minister Nguyen Xuan Phuc, the southern province said the plan to make Phu Quoc a special economic zone (SEZ) should be kept in abeyance until the SEZ bill is passed by the National Assembly.

It also sought permission to draw up a new socio-economic development plan for the island which would turn it into the Phu Quoc Economic Zone instead.

The plan to turn Phu Quoc into an SEZ was first approved in August 2018 with areas earmarked for urban development, tourism, services, housing, agricultural and forestry development, and specialized areas for airports, seaports and non-tariff zones.

Province authorities drafted a number of plans based on this. But the SEZ bill was shelved late last year and has yet to be brought back to the National Assembly’s legislative agenda, resulting in these plans lacking a legal basis.

The plans for the overall development of Phu Quoc Island approved by the government in 2004 are no longer appropriate, according to provincial authorities.

An economic zone should have separate economic space with a favorable environment for business and investment, an area of at least 100 square kilometers (38.6 square miles), a suitable geographical position for regional economic development, and good connectivity with key national and international transportation routes.

An economic zone also enjoys a number of preferential treatments in prioritized industries and tax, but to a lesser degree than the proposed SEZs.

Vietnam has a number of economic zones such as Chu Lai, Vung Ang, Dung Quat, and Nhon Hoi in the central region and Dinh Vu-Cat Hai in the northern port city of Hai Phong.

But one provision in it allowing foreign investors to lease land for 99 years sparked a public outcry, with thousands taking to the streets to protest in Hanoi, Da Nang, Ho Chi Minh City, and several provinces in June 2018.

The police detained hundreds of protesters and said they had uncovered evidence the protests were anti-state actions incited by organizations based in other countries using false, distorted information about the proposed law.

Dozens of protesters were sentenced to jail for inciting violence in Binh Thuan and Dong Nai provinces.

The law, initially scheduled to be passed that month, was postponed to subsequent sessions and then shelved.