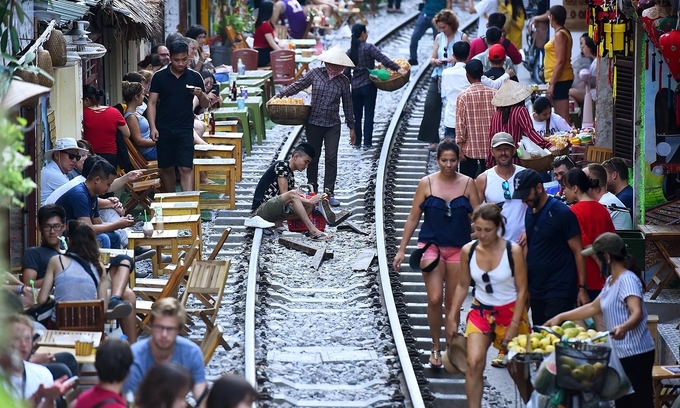 Coffee shops and street vendors spring up along both sides of the railway tracks in the Hanoi’s Old Quarter. Photo by VnExpress/Giang Huy.

The Ministry of Transport has ordered Hanoi to shut down selfie hotspots and makeshift coffee shops along its famous train street as a safety measure.

City authorities have been told to take urgent measures to remove street vendors and illegal businesses that have sprung up along both sides of the Hanoi Train Street, as tracks that run alongside the Le Duan Street are referred to.

The highly unusual sight of a train running several hundred meters on tracks that are crowded closely on both sides by residents’ houses draws thousands of amazed tourists from within and outside the country every year.

In recent years, cafes have opened up along the tracks to serve the tourists who can sit and enjoy their drinks just inches from the railway tracks. They can choose to watch one of two trains that pass through the section every day.

Deputy Minister of Transport Nguyen Ngoc Dong said this practice was extremely dangerous and increased the risk of railway accidents that threaten the lives of foreign tourists.

The tracks were built by the French, who used the railway to transport goods and people across Vietnam, which was then part of Indochina, along with Laos and Cambodia, more than a hundred years ago.

During the Vietnam War, parts of the railway tracks were damaged by American bombs that rained down on the northern region.

Today the original meter-gauge tracks are still a regular mode of transport for locals and tourists.

Hanoi received 4.7 million foreign tourists in the first nine months of this year, up 10.1 percent year-on-year.