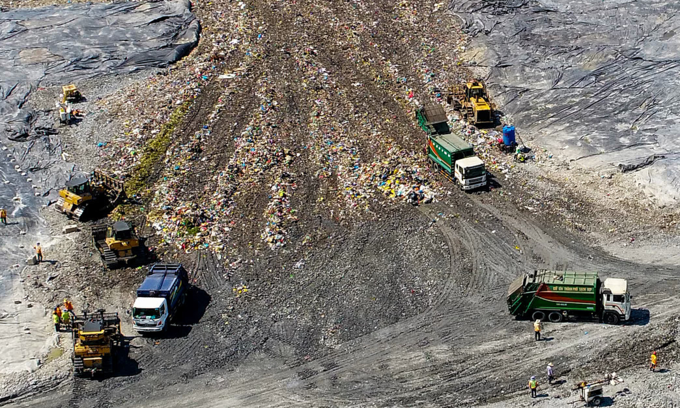 A Vietnamese company has sought permission to explore the possibility of developing two retired landfills in Ho Chi Minh City into residential areas.

The TDH Ecoland Joint Stock Company based in the northern province of Hung Yen thinks two dumping grounds already filled up with trash years ago on the city outskirts can become modern residential areas.

Nguyen Cong Hong, the company’s CEO, said they have asked the city for permission to look into the current situation of the Go Cat landfill which spreads over 25 hectares (62 acres) in Binh Tan District and the 40-hectare Dong Thanh landfill in Hoc Mon District.

“If we get the city’s approval for the plan and find a contractor, we are confident that we can handle all the trash at Go Cat within two years and then turn the entire area into a residential area within the next three years,” Hong told a meeting with leaders of the southern metropolis Saturday.

If it gets the go ahead, the company will work on specific plans to handle the waste and then come up with a detailed construction to build residential areas on the dumping grounds.

Explaining his company’s proposal, Hong said that typical solutions thought of for dealing with the trash at the two landfills would need huge investment capital.

Then, to convert the landfills into parks or commercial projects, the time to recoup investment will be long, and could limit the city’s ability to generate more funds.

Meanwhile, his company’s plan will help the city get one more residential project that can generate additional funds, Hung said.

Both landfills had handled the city’s domestic waste by burying it, and had been ordered to be shut down more than ten years ago after they filled up.

However, it has been reported that trash from different sources are still being dumped at both landfills and locals leaving nearby have been complaining of air and water pollution.

Nguyen Toan Thang, Director of the HCMC Department of Environment and Natural Resources, said they have discussed several ways to handle the waste at the two landfills.

Thang said the department will provide TDH Ecoland with data related to the two landfills, then district authorities and other relevant agencies will work with it and propose a plan to the city on how to use land at the two landfills once the trash is gone.

He said the company should work with the environment department on all related issues, including bidding for contractors and choosing firms to handle the trash. It is important that all processes abide by environmental regulations and standards, and costs are kept to the minimum, he added.

Hong said his company would follow the city’s tentative plans to deal with the waste. It would dig up the landfill, use mud and soil for fertilizer, turning plastic waste into plastic beads or plastic products, and recycle metal waste.

Trash that cannot be treated with those methods will be burnt using a Japanese technique to prevent air pollution, and the ash can be used to make bricks, he said.

The biggest city in Vietnam, HCMC currently has three waste treatment plants that handle 8,700 tons of domestic waste discharged each day by a population of 13 million.

The biggest of these, Da Phuoc landfill in Binh Chanh District, receives 5,700 tons and buries most of it. Two other landfills in the outlying Cu Chi District deal with the rest of the waste by burning it and making compost.

HCMC is seeking to pioneer the sorting of trash at source. Under a plan that it announced last year, all households have to separate organic and inorganic waste after 2020 or pay a fine.

If garbage is classified properly at source, it will be much easier and cheaper for the city to make compost with organic waste, recycle inorganic waste and the rest can either be buried or burned, both officials and experts have said.

At a meeting last May, environment department director Thang said apart from domestic waste, the city generates 1,500-2,000 tons of industrial waste, 1,200-1,600 tons of construction debris, 22 tons of medical waste, and more than 2,000 tons of sludge every day.

He warned that if the city continues to bury its garbage and does not find other ways to treat it, it would run out of space for landfills by next year.